Osteoarthritis of the cervical vertebral facet joints is an uncommon but documented cause of poor performance and lameness in equine athletes. Osteoarthritis of the facet joints generally occurs secondary to normal wear and tear or less frequently, to trauma. Clinical signs include neck stiffness, reluctance to bend the neck in a particular direction, and altered way of going in one direction versus the other. An alteration in way of going secondary to changes in degree of collection or head position may also be seen. Forelimb lameness may also be a result of cervical-facet osteoarthritis, although other causes should be initially ruled out before making this diagnosis.

Diagnosis is traditionally made based on clinical signs and radiographic and/or nuclear scintigraphic findings. Ultrasound, well established as an excellent modality for musculoskeletal imaging in the horse, enjoys application in this region. Sonographic evaluation of the cervical articular facet joints is relatively straightforward, and the relevant anatomy and sonographic appearance are well described. It can be performed with most widely available portable ultrasound machines and a tendon linear probe or curvilinear probe, which is equipment already present in many equine practices.

Sonographic evaluation can yield information about the appearance of the bony surface, joint capsule, and associated soft tissues. In the absence of nuclear scintigraphy, the affected side of the neck can usually be easily identified. Dynamic evaluations can also be performed. With practice, ultrasound can be used to more accurately direct intra-articular therapy or obtain an arthrocentesis,,. The purpose of this presentation is to briefly review the normal appearance of the cervical facet joints, describe our injection technique, and review selected clinical cases. 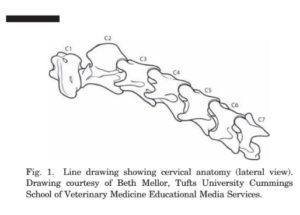 A longitudinal strip dorsal and parallel to the transverse processes of the cervical vertebrae should be clipped with a number 40 (surgical) blade clipper for optimal visualization. If clipping is not acceptable to the owner, the skin should be copiously wet with alcohol or water. However, unclipped hair impedes easy movement of the probe up and down the neck, which is often necessary to confirm location and make comparisons between joints. A high-frequency linear transducer (7.5–10 MHz or higher) can be used cranial to C6–7 on most horses. A slightly lower frequency curvilinear (5.5–8.5 MHz) transducer may be required on more heavily muscled horses or on C6–7 because of its deeper location. Displayed depth varies from 4 to 8 cm depending on location and muscling. 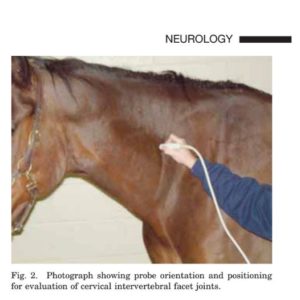 The probe should be held in transverse orientation with the marker dorsal to slightly cranial-dorsal (Fig. 2). The transverse process should be palpated, and the probe should be moved «8–10 cm dorsally (a hand’s breadth) until the dorsal most portion of the vertebrae is located. The probe should then be moved down the neck until identifiable contours or joint spaces are found. Probe rotation should be slightly manipulated cranially to dorsally to maximize (open up) the joint space. The marker is typically oriented cranio-dorsally at a «45° angle. The probe should be slid up and down the neck to evaluate all appropriate facet joints (C2–7) and ensure proper identification of the joints involved. Positioning the horse’s neck so that it is flexed away from the sonographer and/or slightly flexed may aid in identifying the joint space. 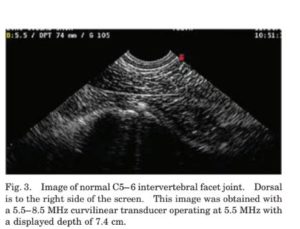 The cervical facets typically present a relatively smooth hyperechoic bony contour with a small but appreciable anechoic discontinuity representative of the joint space. The capsule can be visualized closely overlying the joint, but typically no joint fluid or synovium is seen (Fig. 3). Normal variations in anatomy can occur and should be interpreted with caution. Likewise, the significance of small osteophytes should be weighed with caution. Features of abnormal facet joints include significant bony irregularity or proliferation, lipping or osteophytes at the joint margin, detection of joint fluid or synovial thickening, and widening of the visible margins of the joint space (Fig. 4).

Cervical facet joints are ideally injected under direct sonographic visualization with a guide or free hand. An initial ultrasound should always be performed, the site should be localized, and the expected depth of needle penetration should be determined. The horse should be lightly sedated for the injection. In our experience, detomidine HCL (0.0067–0.0089 mg/kg, IV) is effective. The prospective injection site should be relocalized with ultrasound, and the appropriate depth should be confirmed, because depths and orientation vary greatly depending on head/neck position and muscle relaxation. We do not tend to anesthetize the skin for injections in this location unless the horse is excessively shy of needles. Because of the location variations with head position, the final entry point for the needle after sterile preparation is often not exactly through the site of the skin block, and most horses tolerate the needle well without its use. However, a good-sized area should be sterilely prepared to allow for alterations in final injection site based on head/neck position. The probe should be sterilely covered (sterile transducer cover or sterile 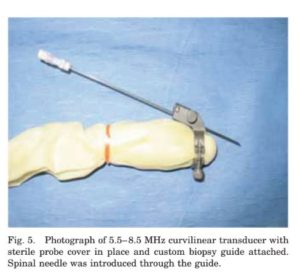 surgical glove). For guided injections, a sterilized custom biopsy guide is placed on the probe with an appropriate gauge attachment (Fig. 5). The site is located, and the biopsy line function on the ultrasound machine is activated; the image is placed so that the guide line transects the joint (Fig. 6).
An 18-g, 6-in sterile spinal needle is then introduced through the guide and skin. The needle should be visualized on the screen before advancing further. If the needle is seen on the appropriate biopsy line, the needle can be advanced to the joint capsule and slightly further to the joint margin, where it should be stopped and aspirated (+ / -). The therapeutic agent is then injected under direct visualization. The needle should not be advanced deeper into the joint because of the risk of spinal-cord puncture (Fig. 7). 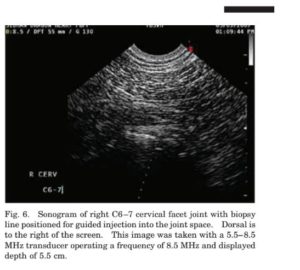 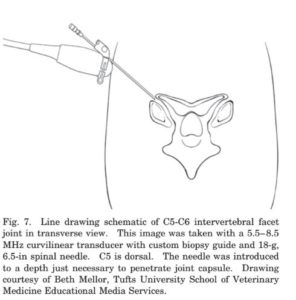 The needle should appear as an echoic to hyperechoic linear echo that may cast a shadow. Anechoic fluid with or without hyperechoic gas specks may be visible filling the joint space or be seen intramuscularly/periarticularly in the injection as extracapsular.

A similar technique is used for free-hand injections, although the needle length can be shorter (18- or 20-g, 3.5-in sterile spinal needle). In this case, the joint is localized, and the needle is placed directly dorsal to the probe on a slight down angle so that it is visible in a long-axis plane (easiest to see) in the field of view (Fig 8). It is then directed ap 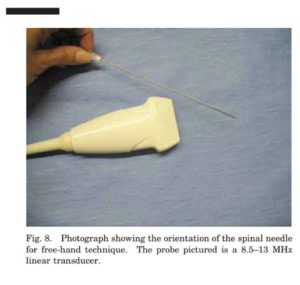 propriately to triangulate with the joint at a «20° angle from the probe. Care should be taken to ensure that the needle and probe remain in the same plane. The needle is advanced through the skin and located. If it appears to be on the correct trajectory for the joint, it is advanced, and the injection is performed as described above. If the needle is not seen, the external trajectory of the needle should be evaluated. The probe should be carefully manipulated in alignment until the needle is located; if necessary, advance or retract the needle slightly to help in identification.

We have found that sonographic evaluation was most likely to be rewarding in cases with clinical signs referable to neck pain and in horses with corroborating radiographic and scintigraphic changes. We have treated multiple horses per year with intra-articular sodium hyaluronate (20 mg per side/site) or sodium hyaluronate and corticosteroids (sodium hyaluronate at 20 mg/side/site and 40–60 mg of methylprednisolone acetate/side/site) under direct sonographic guidance using the biopsy-guide technique. In all cases, fluid/gas specks could be seen entering the joint space, and a lack of fluid in the surrounding soft tissues was confirmed. Synovial fluid was obtained in several cases; more recently, no attempts have been made to aspirate fluid before injection. No negative effects were seen during or after treatment. All cases were treated with only one introduction of the needle through the skin. The majority have responded well or as expected to therapy. Diagnostic arthrocentesis was performed on a separate horse.

Ultrasound of the cervical facet region can be performed relatively quickly and easily with the ultrasound equipment available to most practitioners. It is not an ideal survey tool, and the best yield is obtained when used as an adjunct with other modalities and in cases with clinical signs. Care should be taken not to overinterpret what may be normal variation or non-clinical remodeling in the caudal joints. Intra-articular injection under direct ultrasonographic guidance has been validated as a successful, accurate technique. However, injection accuracy was affected greatly by operator experience. As experience was gained, accuracy increases, suggesting that the technique should be practiced before being used on clinical cases. The effect of experience is seen in the human literature as well. Injection using a biopsy guide tends to be easier and require less operator experience. The disadvantage is the cost of purchasing specialized equipment. Injection using the free-hand technique has been shown to be as accurate as the biopsy guide technique in the hands of experienced operators. Advantages of that technique are that no specialized equipment is required; disadvantages are that is requires more practice before achieving desirable accuracy.

1.099 comentarios en “How to Perform Sonographic Examination and Ultrasound-Guided Injection of the Cervical Vertebral Facet Joints in Horses.”